I always await the arrival of new fall scents from the land of a thousand rollbacks with baited breath. For being inexpensive, brands carried at Wally World are mostly great performers and I swear their blends get more creative and interesting every year!

These are my picks from the newly stocked shelves at my local haunt. 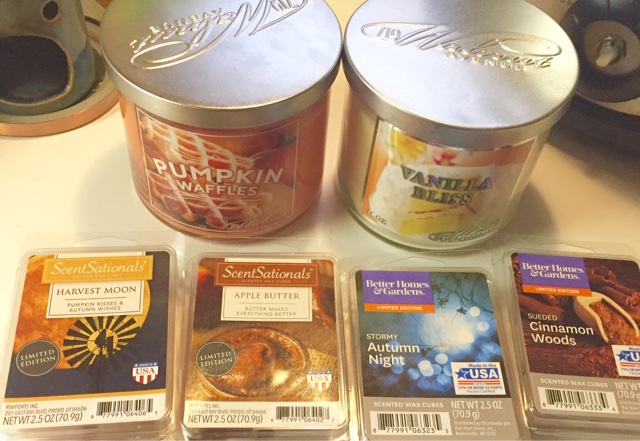 First I must always check the air freshener isle for those elusive 719 Walnut Avenue 3-wick gems. They seem to bring out a couple of new scents every season, a lot with a few annual returning favorites. Of course I bought my all time favorite candle Pumpkin Waffles. I will probably go through several of these in the next few months. This brand usually performs just as well if not better for me than their BBW counterparts and under $5?? Yes please! I was more excited than I probably should have been to see a new vanilla scent: Vanilla Bliss. To me it smells like a rich vanilla buttercream cupcake, yum! There's no way it wasn't going home with me. I have been burning  it for several hours today and it has that nice, satisfyingly deep wax pool with no drowning wicks and a consistently strong and pleasant vanilla aroma. 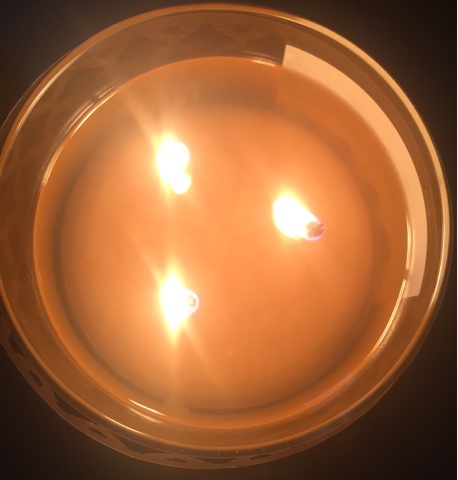 The wax isle was in transition; there were picked over remnants of summer scents mingling with a few lone displays of about half a dozen or so new fall scents. After giving everything a proper sniff, I chose these four:
Harvest Moon smelled to me of pumpkin purée and vanilla custard with just a touch of spice and nuttiness. I'm super into it!

Apple Butter was the only buy I was unsure about; it smells off, like artificial apple to me rather than a rich, spiced cooked apple aroma. I decided to give it a shot anyway and see if it's any better when melting because who wouldn't want their house to smell like amazing apple butter cooking in the crock pot?

Smoky Autumn Nights is a unique and masculine type scent, like a strong, musky cologne with dark amber resin and a touch of woodsmoke. Very moody.
I could see where it could be overwhelming if you don't generally like this type of scent.

Finally Suedes Cinnamon Woods was my most favorite surprise. I was afraid it would be too heavy on the cinnamon, but it's a light, exotic sprinkling of spice well balanced by mellow notes of sandalwood and musk. I would recommend everyone give this one a sniff!

That's it for now on the fall scents, but I'm sure I will be lurking the wax displays for several months looking for new arrivals, and I definitely plan to go back for an Apple Delight candle I spied. I know it's only the beginning of August but I like that many brands and companies seem to get an early start on all things fall. I'm more than ready for the hellish heat of summer to be over. I used to really enjoy summer as a kid/teen, but not so much anymore. Fall has fast become my favorite season; it's beautiful, temperate, and some of my favorite events and holidays happen during fall.

I am excited that several amazing fellow bloggers and I are cooking up a new edition of the Fall Fun Series for this year, starting in September! I enjoyed it so much last year.
Are you excited for anything in particular that's coming up? Let me know in the comments below!
Posted by Amanda C. at 4:00 AM